The Canine/Premolar contact is difficult to capture. Parallel technique is hard to achieve even with film, because of the curvature of anatomy targeted in a bitewing. With sensors, which are not flexible, the challenge is even greater. Indeed, most sensors on the market make matters worse by having a mesial dead space larger than a film packet’s. Therefore, design a sensor with mesial dead space approximately the same as a film packet’s mesial dead space.

For historical reasons, most sensors place necessary electronics near the edge where the cord exits the sensor.  The result is a dead space of up to 6mm, since the electronics cannot also be part of a sensor’s active imaging area.  So, for bitewing purposes, the very edge used to capture the canine/premolar contact may not capture any image at all for its first 3-6mm.  Clinicians who regularly place sensors instantly see this as a problem.

XDR clinicians asked for the dead space to be minimized.  By moving the electronics elsewhere, XDR engineers achieved a 2mm mesial dead space, little more than the dead space common with film packets.  Figure 1 shows how active imaging area at the mesial edge can help capture of the canine/premolar contact.

Figures 2a through 2d demonstrate how XDR’s imaging area extends further toward the sensor’s mesial edge.  XDR has patented this approach under US #9357972B .

Doctors report that good parallel technique is easier to achieve with XDR’s Anatomic sensor.  The maximized mesial imaging area aids capture of the canine/premolar contact.  And that bitewing images more often display 8 contacts for diagnosis (see figures 3a and 3b).

“The seamless integration provided by XDR's friendly, efficient and knowledgeable staff made it so much easier for me. The resolution of the digital images provide honest clarity enabling me to be more accurate during the diagnostic, treatment and recall phases in our endodontic practice. ” 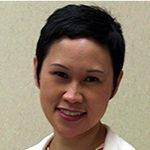